Ibrahim Bouaichi shot himself as police closed in on him Wednesday. A man accused of murdering an Alexandria woman who accused him of sexual assault. 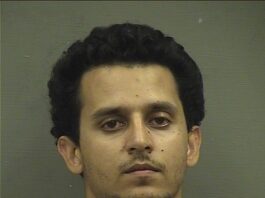 A man accused of murdering an Alexandria woman, who had accused him of sexually assaulting her last fall, died Saturday from a self-inflicted gunshot wound that occurred as police tried to arrest him again on Wednesday. The man’s family issued a statement Saturday night saying they were grieving the loss of both lives.

Ibrahim E. Bouaichi, 33, had reportedly been in a relationship with Karla E. Dominguez, 31, before an allegedly violent incident in Dominguez’s Alexandria apartment on Oct. 10. Dominguez told police that Bouaichi broke into her apartment and sexually assaulted her. Bouaichi was charged with six felony counts, turned himself in to the Alexandria jail on Oct. 21, and was ordered held without bond.

Bouaichi maintained his innocence, and his lawyers pressed for a quick trial, but then the coronavirus pandemic struck and all trials were postponed. Bouaichi’s lawyers said visitation had been curtailed in the Alexandria jail, that they needed to meet with him before trial and that jails were potential coronavirus hot spots, although Alexandria’s jail had not had a case. They asked Alexandria Circuit Court Judge Nolan Dawkins to allow Bouaichi to post bond.

Released from jail at height of pandemic, Virginia rape suspect allegedly killed his accuser. On April 9, Dawkins agreed to set a secured bond for Bouaichi of $25,000, over Alexandria prosecutors’ objection. The judge ordered Bouaichi to stay in his Greenbelt home and not leave except to meet with his lawyers or pretrial services, and not to have any contact with Dominguez. The judge — who retired in June after 26 years and did not respond to a request for comment — did not order electronic monitoring for Bouaichi.

In early May, Greenbelt police found Bouaichi behind the wheel of his car at a Wendy’s restaurant drive-through, and they allege that he rammed one of their cruisers with his car. He was charged with multiple assault counts, drunken driving and multiple traffic charges, but was released on bond after one night in the Prince George’s County jail.

The Greenbelt incident would have triggered a motion from Alexandria prosecutors to revoke Bouaichi’s bond, Alexandria Commonwealth’s Attorney Bryan L. Porter said. But no one notified Alexandria that Bouaichi had been arrested again.

On July 29, Dominguez was found shot to death outside her apartment on South Greenmount Drive, in the Town Square at Mark Center Apartments. Two days later, Alexandria police obtained a murder warrant for Bouaichi.

But when they went to arrest him, he was gone. After several days of fruitless searching, the police issued a news release Tuesday saying Bouaichi had been charged in Dominguez’s killing, and asking for the public’s help in locating him.

The next morning, the U.S. Marshals Fugitive Task Force and Alexandria officers spotted Bouaichi’s car in Prince George’s County. As they moved in to arrest him, he shot himself, Alexandria police said.

He died Saturday at a local hospital, police said in a news release.

Bouaichi’s family released a statement Saturday evening: “Our brother and son Ibrahim died today, having taken his own life. We are incredibly saddened by Karla’s death and wish this tragedy had never happened. … As we lay our son to rest, we ask for peace for everyone involved as we grieve our losses.”