Breaking News
Home / RAPE / Police rule out rape case in the death of a woman.

Police rule out rape case in the death of a woman.

After a teenager’s death in an alleged attack by four men sparked protests across India, state police announced Thursday that she had not been raped. The suspects in the case remain in custody and still face murder charges.

The 19-year-old woman died on Tuesday, two weeks after she was allegedly attacked by upper caste men in the northern Indian state of Uttar Pradesh. She belonged to the Dalit community — the lowest strata in India’s caste based hierarchy.
Local police initially said the victim was raped and strangled in a field near her home in Hathras. But on Thursday, the police said they were ruling out the rape allegations.
“Putting to rest all the speculation, the Forensic Science Laboratory (FSL) report on the vaginal sample of the 19-year old girl of Hathras has revealed that she was not raped,” Prashant Kumar, a senior official from the Uttar Pradesh Police said in a statement. The post-mortem report indicated the woman died due to trauma following injury to the neck.
The state police arrested four men last month in connection to the crime. They were initially charged with gang-rape and attempt to murder. 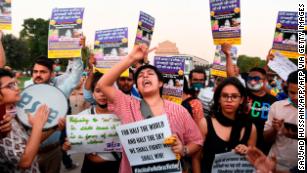 A second Dalit woman has died after alleged gang rape, sparking outrage and protests across India
The victim’s body has already been cremated, and her family has not yet responded to the police statement ruling out the alleged rape.
Speaking to CNN News 18, the mother of the victim, who cannot be identified for legal reasons, said her daughter’s body was taken away from her against her wishes.
“I begged them to show me her face one last time. They didn’t,” she said.
Swati Maliwal, the chief of the Delhi Commission of Women alleged on Tuesday that the victim’s body was cremated without the family’s consent, which the local authorities deny.
“She was cremated with their consent. Her family members were present there. To make this allegation is absolutely wrong,” said District Magistrate PK Laxkar.
India’s main opposition party has claimed a cover up in the case and called on the Uttar Pradesh’s chief minister to resign.
Facing heavy criticism, the state government has promised to fast track the case. The government said a special investigation would be conducted and that the investigative team would have seven days to submit their report.
Once the investigation concludes, the four men’s hearings will take place in a fast-track court, according to state government spokesperson Mrityunjay Kumar.
The woman’s family has also been granted a compensation of about $34,000, a government job for a family member and a new house in the village, he added in a statement. 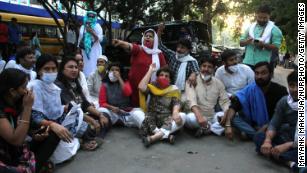 Indian woman from Dalit community dies after alleged gang-rape
The woman’s death sparked protests across Uttar Pradesh, which then spread to major cities including New Delhi, Mumbai and Kolkata. Hundreds of angry protesters chanted and waved banners as they marched through the streets of Hathras. Some demonstrators gathered outside the Delhi hospital where she died; another protest took place near the Indian President’s residence, where several dozen people were detained for violating pandemic restrictions.
The public outcry intensified after it emerged that a second woman, a 22-year-old who was also a member of the Dalit community, died of severe injuries in the same state on the same day after being allegedly being gang raped.
India’s caste system was officially abolished in 1950, but the 2,000-year-old social hierarchy imposed on people by birth still exists in many aspects of life. The caste system categorizes Hindus at birth, defining their place in society, what jobs they can do and who they can marry.
According to human rights organizations including the United Nations Human Rights Council, Human Rights Watch and Amnesty International, Dalit women are particularly vulnerable to caste-based violence and discrimination.
source
Related to this article  Grime Artist Who Raped And Tortured Women Jailed For 24 Years
death protest rape suspect 2020-10-02
Chinedu Eze

Previous It’s a myth that women don’t want sex as they age.
Next 13 year old girl allegedly raped to death in Lagos