Man narrate how police called her sister prostitute and tortured her to death.

One Zakaria Isah, 25, has narrated how his sister, Bilikisu Isah died from complications she sustained after she was allegedly tortured by police operatives attached to Bola Police Outpost in Maraba, Karu Local Government of Nasarawa State.

It was gathered that police arrested 20-year-old Bilikisu, an apprentice tailor, on Monday, August 31, 2020, because her ex-boyfriend identified as Abdul, was alleged to have absconded after stealing N1.4 million in the car dealership center in Maitama, Abuja, where he was working for a Lebanese national.

Bilikisu was alleged to have been tortured for a whole day. The police officers only called her parents to come take her after she started vomiting blood. Her health deteriorated and she died few days later. 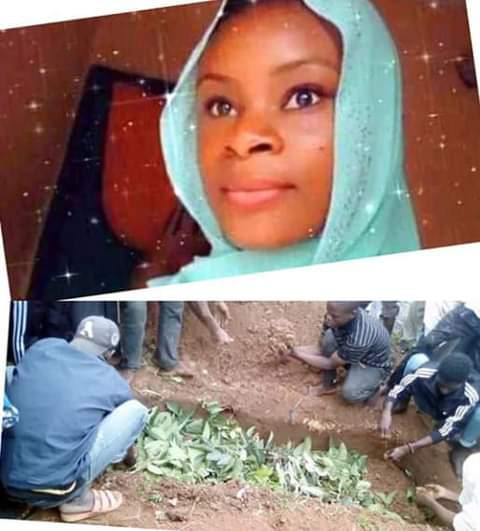 Speaking to Punch Zakaria, a waiter in an Abuja hotel, claimed that the policemen called his sister a prostitute and other unpalatable names, forcibly removed her hijab, and inflicted injuries all over her body with cable wires.

“The police came to our house to take away my sister. They said she was the girlfriend of a suspect called Abdul, who allegedly stole money. They said they wanted to take her to the station but we refused because we did not want her to go , but they said they only wanted to ask her a few questions and that she would be back that same day,” he narrated.

“When we got there, the police asked her to remove her hijab and she said no. They started slapping her (across the face ) and calling her all sorts of names. They called her prostitute, Ashawo , and other names. They said she was sleeping with the suspect . Even when she was removing the hijab , they were slapping her (across the face) in my presence and I became angry,”

“I wanted to say something but they said I shouldn’t say anything. So when the beating became too much, I said I could locate Abdul’s family and they asked me to take them there. When we got there, we saw his aunt’s husband and he was also taken to the police station. So when we got back to the station, I saw what the beating had done to my sister and I became short of words. I left there and returned home because I wanted to change my clothes and return to the police station later. In fact, I wanted to return to the station to fight the policeman that was torturing my sister, but people at home stopped me.

“While I was at home, they continued to beat my sister. They hit her head on the wall and hit her in the stomach. When she returned home, she showed me some marks on her body . She spoke about how she was flogged and the pains she had. I gave her medications but I didn’t know that she would die,”

Speaking further, Zakaria revealed that his sister had long ended her relationship with the said Abdul on the advice of their mother.

“The Abdul they are talking about, my sister had separated from him. My mum noticed the man’s character and told my sister to move away from him and my sister did that . They had not seen each other for some time; it was after incident that Abdul came back and told my sister that he still loved her but my sister said no”

He, however, said he and his sister had no knowledge of the N1 .4m Abdul allegedly stole from the Lebanese, nor his whereabouts.

When asked the condition his sister was in when he left the police station, he said there were marks on her body, adding that she also complained of pain in her tummy.

Late Bilikusu’s friend Rukayya Muhammed, who was also arrested, claimed she was spared because one inspector said he liked her.

On that, Zacharia said: “We understand the policeman is always like that and that he has a permanent room in a hotel where he always takes women. He told my sister’s friend to come and see him and he gave her his phone number”
*What was the last conversation you had with your sister?:

“The last time I saw her; she came to my room and sat on the chair. She moved from one chair to another and left. Later, I was told she was unable to move her legs again so I carried her and put her in my mum’s room. I wanted to go and call a commercial motorcyclist so that we could take her to the hospital; that was when she died.

*What do you miss most about her?

*What were her dreams and aspirations?

She used to say that when she got married, she would be a billionaire and would give her mother this and that. There was one day I told her I would have money more than her husband and we both laughed over it. But she said she just wanted to be a good person and a good housewife. She was a good cook. But she dropped out when she was in Senior Secondary School 2. People loved her. And she would not see someone in need of something and not want to help them, no matter how little. She was an apprentice tailor and very hard-working.

Related to this article  20-Year-Old-Girl: How I Was Gang-Raped For 5-Days, Forced To Have Sex With My Brother

Zacharia said that his sister’s death took a toll on the family and they are finding it difficult to cope with the loss.

“Up till now, we are still in shock. I have been taken to the hospital twice. Mt parents are still  recovering. My elder sister is not feeling well,”

He lamented that his family has no money to take the matter to court and therefore, called on the government to investigate the incident.

He said: “I call on the government to investigate this issue. Yes, I know I have lost my sister already but the government should do something to stop security agencies from torturing people. I couldn’t defend my sister because I didn’t have the power to do so; if not, I would have saved her. The government should caution the Nigeria Police. They said the police are our friends but they are the ones killing us and we don’t have the power to challenge them.”

Meanwhile, the spokesperson of the Nasarawa State Police Command, Ramhan Nanse, had earlier denied the allegations and said Bilikisu was released “unconditionally” and was not tortured.

Previous My DMs are flooded’ – Rapper, Cardi B says following split from husband Offest
Next Man arrested for defiling his friend’s seven-year-old daughter in Anambra; blames the devil