Breaking News
Home / DIVORCE / Husband of blue-eyed Kwara woman resurfaces, reveals he didn’t abandon his wife but her ‘waywardness’ made her unable to submit to him

Husband of blue-eyed Kwara woman resurfaces, reveals he didn’t abandon his wife but her ‘waywardness’ made her unable to submit to him

The husband of the Kwara woman who went viral because of her and her daughters’ blue eyes, has spoken out.

Recall that the wife, Risikat Azeez said her husband had no problem with the colour of her eyes but he started acting out after she gave birth to blue-eyed daughters. She alleged that he would leave home for days and wouldn’t provide for them, so she had to move back in with her parents. She added that the man never returned for her or their kids since then.

However, the husband, Wasiu Omo-Dada has denied the report.

Speaking to Punch, he stated that he met his wife with her blue eyes and loved her that way. He denied reports that he started acting out after his parents made a degrading statement about his kids.

Wasiu said his wife left because of her “waywardness”. He said she disrespected him at will even though he treated her well and always provided for her. He added that he bought snacks for her daily on his way back from work as though she were a new bride, but she wasn’t satisfied.

He said she wanted more and put his children’s photo online, begging for help from strangers.

Related to this article  Save me from my husband, step-children. 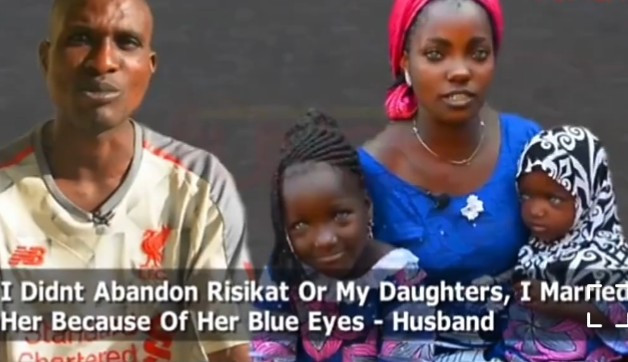 He denied reports that he didn’t provide the medical bills when his wife went to the hospital to have their kids. He said he still provides for them till date even though they are separated.

He says that almost every two week, he takes buckets of rice, beans, bread, and more to his in-laws’ home for his wife and kids. He added that he buys his daughters expensive clothes.

However, Risikat’s mother debunked his claims. She said her son-in-law never took care of her daughter and grandchildren. She said it got to bad that her daughter was looking emaciated so she asked them to come home.

She said she invited her son-in-law, Wasiu for a one-on-one meeting but he was rude to her and never apologized.

She said that after her daughter had her first child and the baby was blue-eyed, her son-in-law started misbehaving, so they separated briefly and her daughter returned home.

Later, he came to beg so they allowed him go back with his wife.

Risikat’s mother said she begged the elders to let her daughter go back to her marriage because she didn’t want her daughter to have children by different men. She added that she had all her kids by one man and she wanted same for her daughter.

Related to this article  Soldier, 38, and his wife 'murdered their four children by poisoning them with carbon monoxide before killing themselves'

However, when Risikat was pregnant again, he started acting out and will leave the house for days, without dropping money for his family to feed, Risikat’s mother claimed.

She said that she had to intervene and provided her daughter’s hospital bills.

She added that when her daughter gave birth, it was twins. Taiwo had brown eyes and Kehinde had blue eyes. Unfortunately, Taiwo died at four months old.

Risikat’s mother said her son-in-law’s father then asked him if this is how he’s going to keep having blue-eyed kids. She added that Wasiu’s father said his grandchildren’s eyes scare him and that’s why he doesn’t carry them.

She said the statement made Wasiu’s behavior worse.

Related to this article  Footballer, Ahmed Musa and his wife, Julie, welcome a baby boy

Speaking, Wasiu denied his mother-in-law’s claims and swore that his parents never hated his daughters’ eyes. He also swore that he never starved his wife and daughters.

He said that his wife has always wanted a big life. He added that she maltreated him and wouldn’t give him food when she cooks. He said that when he goes out to buy bread and tries to take stew from the pot, Risikat will seize his plate, forcing him to eat his bread with water.

Reacting to the Kwara State First Lady’s plan to reunite the husband and wife, Risikat’s mother said it is her dream for her daughter to be happily married but she doubts if Wasiu will ever make her daughter happy. She said she hopes that God will give her daughter the right man for her.

On his part, Wasiu said he doubts if Risikat will ever be able to submit to him. He said he believes that even if they reconcile, her bad behaviour will continue.

As for Risikat, she said it’s up to God to decide if there’ll be a reconciliation.

Watch the video below.