Learn about unusual things that happen to some women after sex

Think all women fall asleep happily, nestled in their husband’s arms, after a little nooky? Think again! Some women have to deal with a myriad of reactions after sex, ranging from bleeding and pain to tears and food cravings—even amnesia! Here, our experts weigh in on some of the more unusual things women encounter after sex.

1. Crying
You love him and you’re not mad at him—you even forgave him for forgetting to stop at the store on the way home from work like he promised to—so why are you feeling weepy after sex? Don’t worry, says Isadora Alman, a board-certified sexologist and licensed relationship therapist in San Francisco. Occasional post-sex tears that don’t accompany relationship trouble are normal and usually no big deal. “This is often a release of stored tension, like an orgasm, and sometimes accompanies one,” she adds.

2. Bleeding
Kathleen,* 35, a woman who lives in the Boston area, says that when she uses the bathroom after sex, she notices a little blood on the toilet paper, and it worries her. For good reason, says Lissa Rankin, MD, ob-gyn, an author and the founder of OwningPink.com. “Postcoital bleeding is never normal unless you’re menstruating or have just lost your virginity.” According to Dr. Rankin, if you experience bleeding after sex, it could be related to any of the following: abnormal (precancerous or cancerous) cells on the cervix, which tend to have extra blood vessels that may be fragile and bleed when touched during sex; a cervical polyp; an STD that infects the cervix or vagina, such as gonorrhea, chlamydia or trichomonas; abnormalities inside the uterus, such as a fibroid, polyp, or endometrial hyperplasia or cancer; a vaginal infection, such as a yeast infection, that can irritate the walls of the vagina and cause bleeding; or trauma to the hymen, vagina, cervix or perineum. “If you’re bleeding after sex, especially if it happens more than once, see your doctor,” recommends Dr. Rankin. “Postcoital bleeding is something you don’t want to ignore, since it might be the only sign you get that something is wrong.”

Related to this article  How long should sex really last? The answer may surprise you

3. An Intense Desire to Be Alone
While many people enjoy lingering in each other’s arms after sex, some are just the opposite. In fact, some women say they can’t wait to pull away and retreat to another part of their house—away from their husband. “After the intense closeness of sex, a woman or her partner may need to be alone to collect herself, to feel integrated again,” explains Alman. “Sometimes a woman feels she has given too much of herself and needs to be alone to feel whole again,” she continues. “If she recognizes her need, she can manage to do something about it rather than start a fight or withdraw in what could feel like abandonment to her partner.”

4. Bad Headaches
If sex is followed by a bad headache, you’re not alone. It can be a common complaint, says Dr. Rankin. “It’s what we docs call ‘coital cephalgia,’ ‘exertional headache’ or ‘effort migraine.'” Translation: an orgasm headache. “Because intercourse and orgasm can launch a whole cascade of physiological events including increased blood pressure, it may trigger headaches, including migraine headaches,” she says. “But it’s important to get this checked out to make sure the headaches are not caused by organic causes, such as a brain tumor or other neural abnormality. Usually, these types of headaches are harmless, although they can ruin your libido lickety-split. If you’re suffering from postcoital headaches, talk to your doctor. You may benefit from taking medication before sex, which can help prevent the headaches and help you keep your mojo.”

5. Temporary Amnesia
It sounds like a scene from a movie: After sex, a woman suddenly has no memory of where she is, what year it is and how she got there. But what sounds like fiction is actually a real, yet rare, medical condition called transient global amnesia—when blood flow is temporarily restricted from the hippocampus area of the brain. Experts believe it may be brought on by strenuous activity, such as vigorous exercise, or sex with orgasm. “Some women also black out with orgasm, momentarily,” adds Alman. “It’s always best to be checked out to eliminate the possibility of a mini-stroke.”

6. Sperm Allergies
According to experts, many women in the United States suffer from something called seminal plasma hypersensitivity, an allergy to semen that can leave a woman with hives, itching, swelling and breathing difficulties. In severe cases, it can even also cause death. This serious condition is avoided by using condoms, and some sufferers have benefited from desensitization therapy. However, itching and burning after sex isn’t always the result of a sperm allergy. “The culprit may well be a food allergy,” says Alman, “something the lover has eaten and is being expressed in his semen. If the woman has known food allergies she needs to ask him if he has eaten whatever it is. The easy solution is for him not to eat that for 36 hours before unprotected intercourse, or to use a condom.” 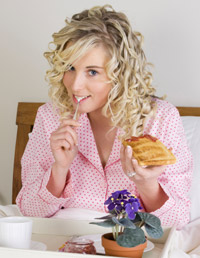 7. Hunger
You know the joke about the guy who has sex and immediately gets up to make himself a sandwich? Well, it’s not that unusual, and women may find themselves feeling hungry after intercourse, even craving specific foods, says Alman. “Many people, women and men, are hungry after exercise,” she explains. “Sex is exercise—if it was good sex.”

8. Sore Throats
After sex, Jennifer,* 33, a woman in Austin, Texas, says the most unusual thing happens: She gets a sore throat. “I think it’s from all the heavy breathing that results in a severe dry mouth,” she says.The cure? Water on your bedside table to keep you hydrated, recommends Dr. Rankin. But, she cautions, if you have developed a sore throat after oral sex with a new partner, it’s best to seek medical attention as it could be a sign of a sexually transmitted infection. “Infections like herpes and gonorrhea can lead to throat infections, resulting in sore throat,” she adds. “Other possibilities include laryngeal papillomas caused by HPV or thrush caused by yeast that may have been carried on your partner’s penis.”

9. Severe Pain
Amy,* a 30-year-old woman in Jackson, Mississippi, knows about pain during and after sex. Since her marriage in October 2008, sex had been incredibly painful, and after it was over, the pain lingered. “I visited my gynecologist, who prescribed an estrogen cream and Valium,” she says. But the combo didn’t help, and after seeing a specialist, she was diagnosed with vestibulitis, and underwent surgery—which solved her problem. “Learn from my story,” says Amy. “Sex shouldn’t be painful, and you can be treated.”

Dr. Rankin agrees. “When sex hurts regularly, we call it dyspareunia, and it can result from a variety of conditions.” These include vaginismus (when the muscles of the vagina involuntarily contract, which may make it impossible for penetration to happen), vulvar vestibulitis (inflammation of the vestibular glands in the opening to the vagina, which makes sex feel like you’re being stabbed with a knife), vulvodynia (chronic vulvar or vaginal pain), endometriosis or any number of other gynecologic conditions (interstitial cystitis, ovarian cysts, fibroids, chronic yeast infection, etc).

Other causes of painful intercourse and post-intercourse can include trauma and sexually transmitted diseases. Bottom line, Dr. Rankin says: Persistent pain isn’t normal. “Too often, women fail to tell anyone when sex hurts,” she says. “They assume it’s always going to be that way and avoid getting help. I promise, we can help.” *Names and some identifying details changed to protect privacy.