Nigerian men seem not to be intelligent. 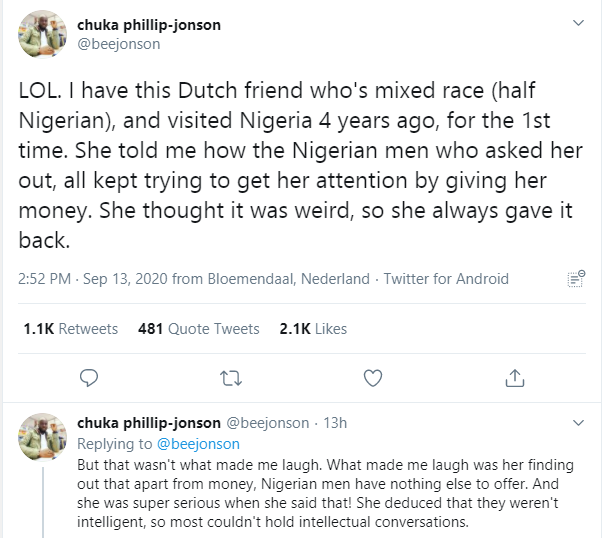 A Dutchreviewing writer, Chuka Phillip-Jonson has stated that Nigerian have nothing to offer to independent women in an egalitarian society.

The writer who backed his claim by sharing a female friend’s experience in Nigeria, averred that Nigerian men hate it when a woman is empowered and isn’t impressed by their wealth.

LOL. I have this Dutch friend who’s mixed race (half Nigerian), and visited Nigeria 4 years ago, for the 1st time. She told me how the Nigerian men who asked her out, all kept trying to get her attention by giving her money. She thought it was weird, so she always gave it back.

But that wasn’t what made me laugh. What made me laugh was her finding out that apart from money, Nigerian men have nothing else to offer. And she was super serious when she said that! She deduced that they weren’t intelligent, so most couldn’t hold intellectual conversations.

“Apart from taking girls to restaurants, beer/ice cream parlours, and nightclubs, what else are Nigerian men good for?” She asked. Cos those were the places they all wanted to take her to. And during discussions, their opinions always came from a sexist and misogynistic angle.

Another thing she found super weird was how they kept inviting her to their churches, and offering her marriage. One of them offered to marry her, if she’d agree to become a housewife. They were all perplexed to find that she was neither interested in marriage nor having kids

I’ve said this before, and I’d say it again. In an egalitarian society, where men can’t flex on women with their wealth because women have their own money, cars, houses, etc., there’s really nothing Nigerian men would have that these empowered and independent women would want.

And I’ve seen it with my two eyes. Nigerian men hate it when a woman is empowered, and isn’t impressed by their wealth. It’s why they can’t stand independent women who don’t need their money. In a relationship with such women, they wouldn’t know what to do with themselves.

Also, Nigerian men hate it when a woman doesn’t depend on them for (financial) support. Being a woman’s provider gives them power over said woman. So when a woman becomes independent, they lose that power. Plus, they also love to boast about how they take care of their women.source