Sofian Loho Dandel, a 28yr old mechanic from Indonesia found love over a phone call. What’s more, the caller had dialled him by accident. He ended up speaking to the voice on the other end for almost an hour, he fell in love and decided to track down the face behind the voice. What he did not know was that the voice belonged to Martha Potu, an 82yr old widow. 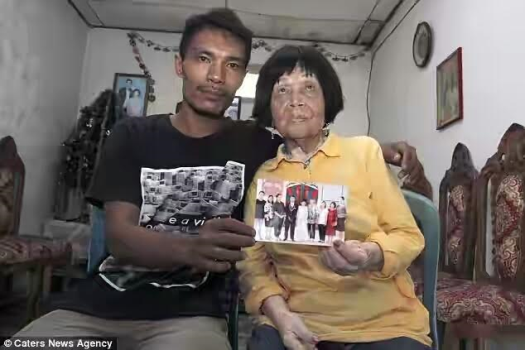 He was a bit taken aback when she greeted him at her front door. While Dandel was shocked at Potu’s appearance because she hadn’t disclosed her age over the phone, he had already expressed his love to her and his feelings remained unchanged.
The two chatted for hours and Dandel learned that Potu had been living a lonely life after her husband died ten years ago and her two children left the country to work abroad. Dandel was touched by her story and promised her forever, on February 18 this year, the happy couple exchanged wedding vows in presence of their family and loved ones in North Sulawesi, Indonesia. The overjoyed groom said:

‘It all started after a call came into my cell phone a year ago. I just answered it not knowing who it was. I loved how she introduced herself and how politely she was talking. Then on, we continued chatting over the phone.

‘She was caring and full of energy and with each passing day, I was drawing towards her. I had never dated before and started feeling in love. I could not wait to meet her but I did not know how old she was. But we felt really in love and agreed to continue this relationship.’

Indonesia is a very conservative society and the couple didn’t have an easy path to marriage, their families both opposed the union vehemently but had to assent when the lovers displayed determination and loyalty for each other.
Dandel’s mother, Magdalena, 60, said:

‘We did not know he had chosen a grandmother! He had kept her age hiding from us until we met her.We were naturally surprised. Very surprised at the time, but what can I say. We see them love each other, so we accepted his choice.’

For Potu, who is basking in the glow of a new bride, her husband is God’s gift to her.

‘I used to pray God for a companion who can take care of me at this old age and he answered my prayers by sending Sofian as a blessing into my life,’ the old bride said.

The unusual couple have become the talk of the town after a guest uploaded their pictures from the wedding on the internet.
More photos below… 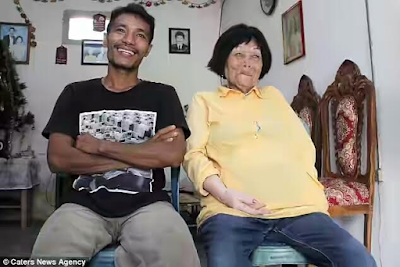 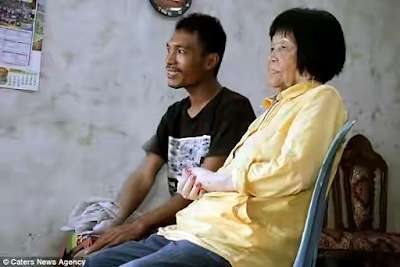 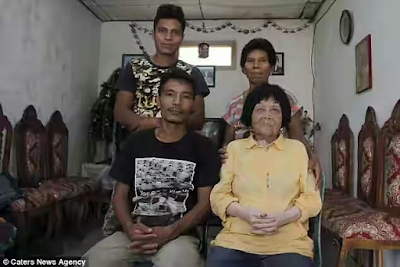